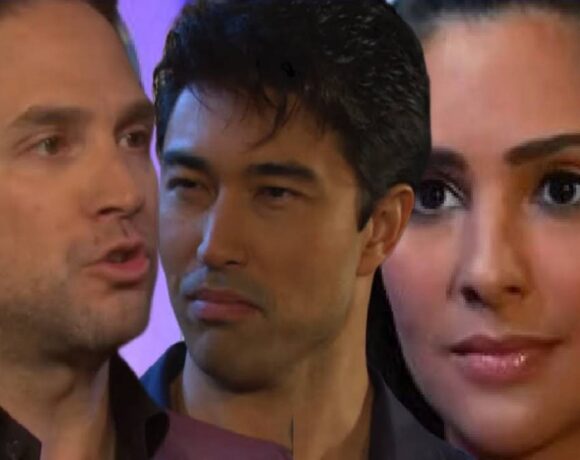 Days of our Lives Next Week Spoilers December 26 – 30, DOOL

Days of our Lives spoilers for December 26 – December 30, 2022, tease a most inconvenient truth outing, an upsetting choice being made, and so much more. This will be a week you won’t want to miss!

Thanks to Justin Kiriakis’s prying, the jig is well and truly up for Xander Cook, and not even his and Gwen Rizczech’s combined devious minds can contrive a way to get him clear — but it’s Sarah Horton Cook learning the sordid truth — that he participated in Ava Vitali’s scheme to kidnap and ransom Susan Banks that upsets Xander the most.

And right after he convinced her to join him on a holiday in Greece! It’s Will Horton’s intention to make merry with his husband and in-laws on Christmas Eve, but he’s stopped in his tracks when he spies Leo Stark amongst those gathered in the Kiriakis living room.

He’s further chagrined when he issues Sonny Kiriakis an ultimatum — him or Leo — and Sonny calls his bluff and insists that Leo is staying put! In other DAYS news, Rafe Hernandez and Jada Hunter have a tense encounter with Nicole Walker Soon-To-No-Longer-Be-Hernandez, EJ DiMera decides to unburden himself to his ex.

Days of our Lives Next Week Spoilers December 19 – 23, DOOL

Days of our Lives spoilers for December 19 – December 23, 2022, tease comfort from the great beyond, much-needed self-care, and so much more. This will be a week you won’t want to miss!

In the lead-up to Christmas in Salem, several beloved ex-town folks make reappearances — Rex Brady and Jennifer Rose Horton Deveraux included — but none pack quite the punch that Chad DiMera’s deceased missus does. Abigail Deveraux DiMera’s main purpose: help steer Chad through his first major holiday without her. Easier said than done.

Bonnie Lockhart Kiriakis continues to struggle in the wake of her nightmarish encounters with her masked abductor, leading Justin Kiriakis to suggest that she seek professional help. Though initially dismissive of the idea, Bonnie soon resolves to face her trauma head-on.

In other DAYS news, EJ DiMera and Nicole Walker Soon-To-No-Longer-Be-Hernandez share a fraught moment, Chloe Lane and Kristen DiMera have a scratchy encounter, and Johnny DiMera is forced to leap to Wendy Shin’s defense when she’s grilled by Stefan O. DiMera. 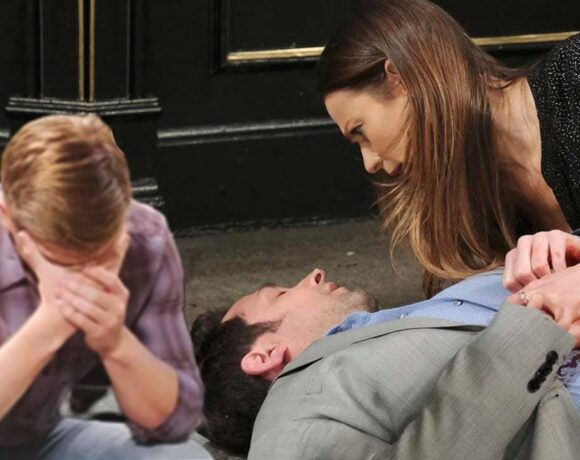 Days of our Lives spoilers for Monday, December 19, 2022, focus on Xander Cook making things worse for himself, Ava Vitali’s violent revenge plot going sideways, and John Black trying to manipulate Kristen DiMera. This is an episode you will not want to miss.

Xander isn’t the best judge of right and wrong. Sure, he knows when he’s doing things wrong, and he feels bad when he does them, but it doesn’t stop him from doing them. As usual, his crimes are adding up, and instead of turning himself in, he is continuing to pile on more.

Is there a way to break this cycle? Sure. Will he take it? Probably not. Unfortunately, it’s all coming back to haunt him, and he’s feeling the walls closing in. There may not be getting out of this mess this time.

Over at Susan Banks’s memorial, chaos ensues in the aftermath of Ava’s diabolical scheme to set off a deadly blast. The dust begins to clear after the explosion, and things go completely awry. It seems her plan to inflict as much pain as possible for EJ DiMera isn’t going the way she thought it would. 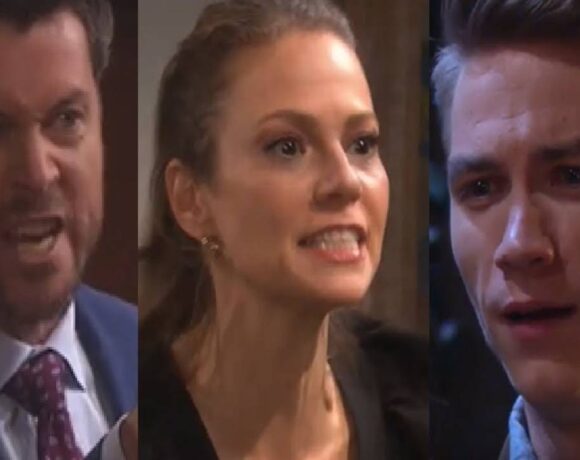 Days of our Lives spoilers for Friday, December 16, 2022, tease tempers rising as the two men who have their hearts set on being Chloe Lane’s man go head to head. Will the best man win?

Brady Black may be pretending to tolerate Kristen DiMera but the truth is, he’s still very much in love with Chloe. His heart belongs to her and he’s just waiting until this mess with his ex is over before he can run right back to her. Unfortunately, she may not be available.

Stefan O. DiMera has stepped into Brady’s place and quite adores his time with Chloe. She’s nice to wine, dine, talk to, and spend time with. Plus, there’s that whole brainwashing thing. He wants her too and he’s not stepping aside.

Things get pretty tense when these men confront each other over the songstress. They’ll have no problem airing dirty laundry, slinging accusations, and going for the throat. This is a showdown you will not want to miss. 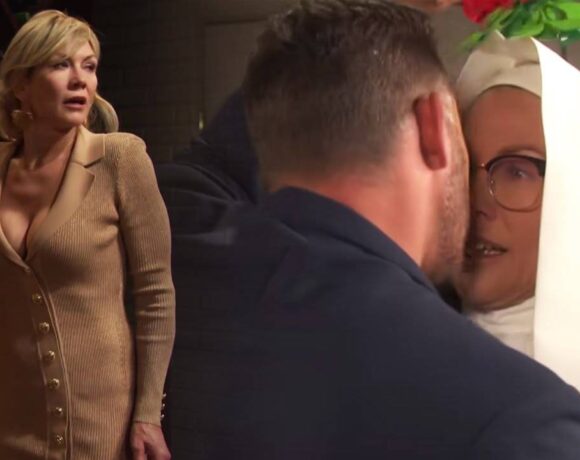 Days of our Lives spoilers for Thursday, December 15, 2022, tease Kristen DiMera better watch her back. Her enemies are on the rise with John Black and Marlena Evans Black taking front and center. They have grown tired of having this baddie in their lives.

It’s no secret John isn’t a fan of his son’s “live-in girlfriend.” Kristen is a schemer, a scammer, a killer, and basically everything else in the book. John knows this woman isn’t in his house because Brady Black wants her there, and since Brady can’t get her out, he and Marlena will!

The dream team put their heads together to come up with a foolproof plan to oust the devilish diva once and for all. Enough is enough, and they aren’t going to play nice. Not now, not ever again. Do they have what it takes to bring Kristen down?

As for Brady, he’ll be out of the loop on this one because he — and his lips — will be busy doing something else. He shares an unexpected kiss with someone special. Who can it be? Is this a big mistake?

Ava has taken a lot from EJ, but she’s not stopping anytime soon. In fact, she’s ready to heat things up once again and ruin him once and for all. She is going to make him pay for every single time he ever went after her, talked down to her, or even looked at her the wrong way.

What does she have up her sleeve this time? Whatever it is, Ava needs it to be foolproof and work. One small slip-up and EJ will get the upper hand once again, and that’s the last thing Ava wants or needs.

Ava isn’t the only person suffering an EJ problem. Just wait until Rafe Hernandez finds out where his wife is living. He’s going to have a huge problem with Nicole Walker Hernandez shacking up with EJ. We can’t imagine he’s going to like that at all. 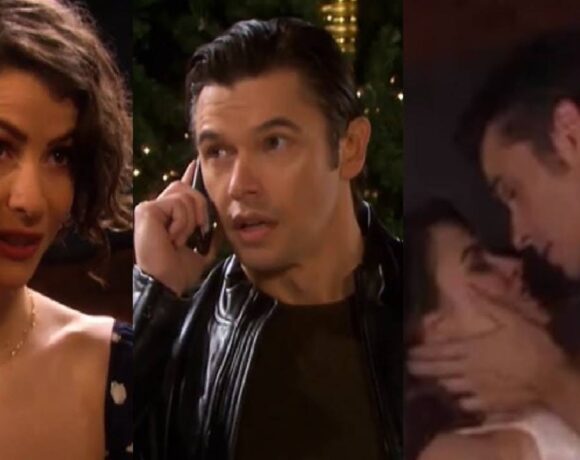 Days of our Lives spoilers for Tuesday, December 13, 2022, tease Sarah Horton Cook worrying herself sick over her husband. Something is off with Xander Cook, and she’s sure he’s up to no good again.

Sarah fell in love with Xander despite all odds — and her better judgment. This man did unforgivable things, including stealing her a baby and lying about her precious one passing away. But, she truly thought he changed and gave him a second — and third, and fourth — chance. Was she wrong?

Sarah turns to Justin Kiriakis to help sort out her thoughts. She has some serious suspicions. Does he have them too? And, if she’s right, what do they do? Poor Sarah may regret digging around.

As for Xander, what he’s doing may be worse than what Sarah even suspects. However, no one may ever learn the truth if Gwen Rizczech has anything to say about it. She enlists Leo Stark as part of her grand plan to clear Xander’s name at all costs. 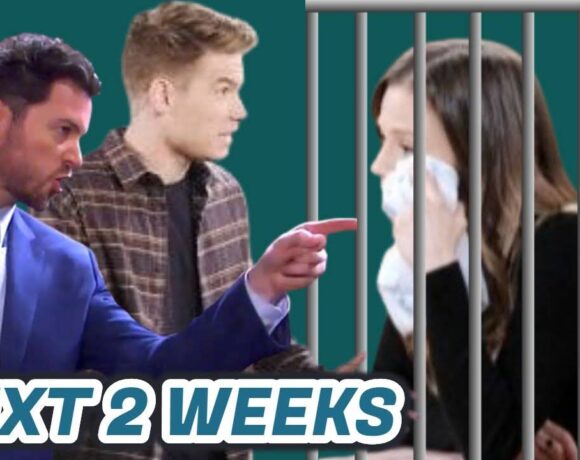 Days of our Lives next two week spoilers point to Chad DiMera‘s unexpected visitor. Plus, total destruction at Susan Banks‘ memorial. And the Twelve Days of Christmas, the weeks of December 12-23 on the Peacock streaming soap.

DOOL 2-week spoilers reveal Chad DiMera’s random caller. Who pays a visit to Chad? Perhaps, he gets another visit from his angelic wife, Abigail Devereaux. She may give Chad her blessing to see Stephanie Johnson.

After all, Chad does really like her. However, he has been hesitant to move on from Abby’s death. Next, Chad’s unannounced visitor could be somebody on this side of Heaven. So, Chad DiMera could have a run-in with any of his many siblings. Or his best friend, Sonny Kiriakis, could surprise him. After all, Days of our Live spoilers reveal Sonny and Chad lean on each other.

Further, Leo Stark could drop in on Chad DiMera. In fact, the reformed conman could spread holiday joy. He may beg blue-eyed businessman Chad for forgiveness and a job. As a matter of fact, Chad DiMera has been hunting for legitimate work. Find out who surprises Chad during the next couple of weeks on DOOL. 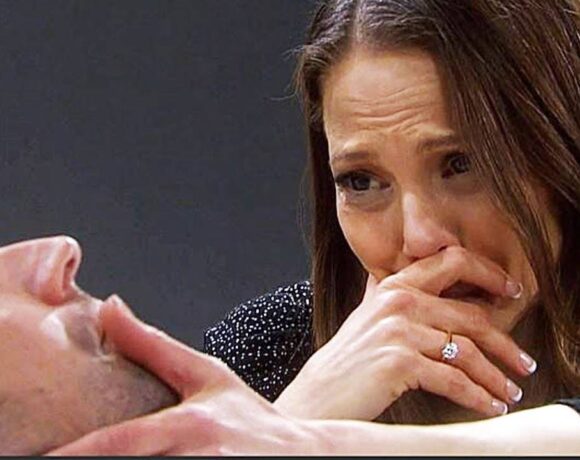 Days of our Lives Next Week Spoilers December 12 – 16, DOOL

Days of our Lives early weekly spoilers indicate explosive trouble ahead at the memorial for Susan Banks. And Eric Brady kisses his lawyer. Also, Sarah Horton snitches on her husband during December 12-19 on the Peacock exclusive.

DOOL weekly spoilers hint that Susan Banks’ memorial service gets interrupted by an explosion. Next week, family and friends gather for Susan’s funeral. The kooky mother and grandmother died tragically in a fiery car crash. But it was no accident.

In fact, her son’s enemy, Ava Vitali, purposefully drove the getaway car off the cliffs of Salem. Of course, EJ DiMera blames himself. He could have paid Susan’s ransom on Days of our Lives. However, instead, he decided to play a game with Ava. And now his poor mother, Susan, is dead.

Days of our Lives’ early weekly spoilers hint that Ava Vitali is very much alive. She didn’t perish in the burning auto. Plus, she plots revenge against Elvis Junior. Killing Susan was only the beginning. In fact, EJ could still be targeted. The mobster’s not done with him yet. 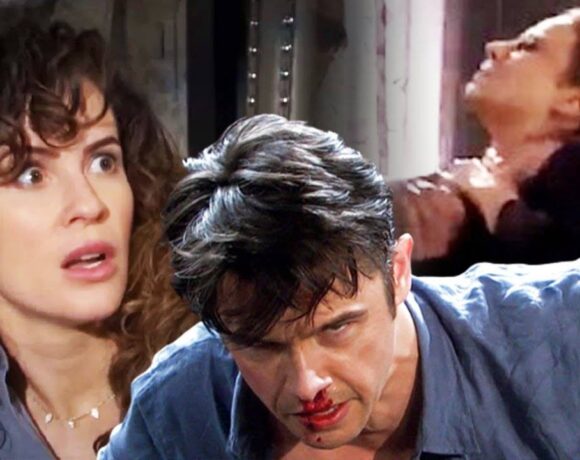 Days of our Lives Next Week Spoilers December 12 – 16, DOOL

Days of our Lives spoilers for December 12 – December 16, 2022, tease strange bedfellows, a woman on a mission, and so much more. This will be a week you won’t want to miss!

Eric Brady and Sloan Petersen’s efforts to get to know one another better results in a fringe benefit: a day of passionate lovemaking, and the eventual extension of an invitation for Eric to move into Sloan’s studio apartment.

While Eric thanks his live-in lover profusely, don’t expect Nicole Walker Soon-To-No-Longer-Be-Hernandez to respond in kind when she pays Sloan a visit, catches sight of her and Eric in a state of undress, and deduces what the two have been getting up to.

Look for Ava Vitali to step up her efforts to reunite EJ DiMera and his beloved mother by planting a bomb at the venue hosting Susan Banks’s memorial service and for her plan to go very much awry when her one and only beloved crashes the event. Will Tripp Johnson wind up an unintended casualty of an escalating war that he has no part of?