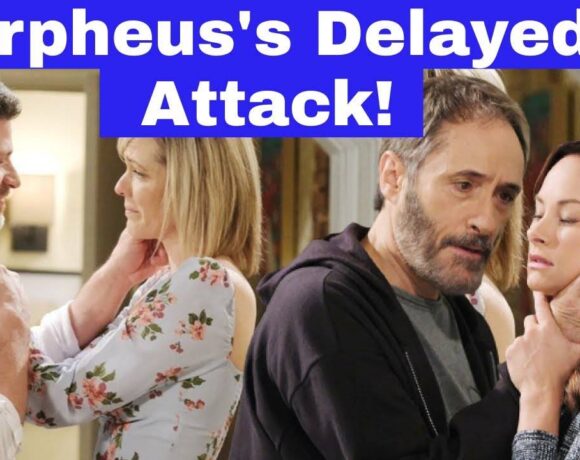 Days of our Lives spoilers for Thursday, September 15, 2022, tease inconvenient information, a difference of opinion, and a custody crisis. You won’t want to miss a minute of this all-new episode.

Not that he’ll believe anything that comes out of her mouth — and why would he considering the number of out and out lies she’s told him to his face — but Gabi Hernandez DiMera takes it upon herself to tell EJ DiMera that his brother is back from the dead.

No, not Andre DiMera. Not again. And no, not Benji Hawk. He’s literally the only male DiMera — outside of Jake DiMera, maybe — to die and actually stay dead.

No, the newly resurrected DiMera is none other than Stefan O. DiMera, lustchild of Stefano and Vivian Alamin. Given that EJ has a real inferiority complex, this news will not go down as a treat.

Days of Our Lives Spoilers For Wednesday, June 30, DAYS

Days of Our Lives spoilers for Wednesday, June 30, 2021, tease advice coming from a most unlikely source, a request for a second opinion, and a tense standoff between a trio of foes.

Days of our Lives spoilers warn that Rafe Hernandez is about to find himself in quite the pickle. His doting lover, Ava Vitali, has just revealed that they’ll be breaking bread with common friend Nicole Walker Brady – but she’s the same woman that Rafe’s been having “Not Safe For Work” dreams about!

Luckily for Salem’s top cop, he’ll have back-up – in the form of Duke…the stuffed teddy bear that he and Nicole share custody of. That fount of homespun wisdom will be on hand to help Rafe weigh his options and offer up some sound relationship advice. What are (inanimate) friends for, if not for that?

Lani Price Grant may love her auntie Paulina like a second mother…but DAYS spoilers reveal that she’s also got her number, and she knows that the shady business lady is up to something.

Continue reading on the next page…

Days of Our Lives Spoilers: Justin Kills Orpheus, What happensfor Justin in Salem?

Days of our Lives spoilers & rumors tease that Justin Kiriakis (Wally Kurth) smells blood when he finds Orpheus (George DelHoyo), the man who supposedly killed his wife Adrienne Kiriakis (Judi Evans). He pulls a gun on the helpless guy and what happens next will blow your mind!

Kurth spoke to Soap Opera Digest about the explosive NBC DOOL plot and revealed a few interesting spoilers about what will go down when he confronts his enemy.

First off, Kayla Brady (Mary Beth Evans) is totally against Justin and his brand of vigilante justice on the NBC soap. Justin relents and does not go searching for the bad man, but he does confront him when Orpheus is brought to the Salem PD.

“He’s never had one-on-one contact with Orpheus,” he previews, “this man who’s allowed this whole circumstance he now finds himself in with Kayla, Steve and Adrienne.” While Justin is happy with Kayla, he still feels anger over what happened to Adrienne and his temper gets the best of him.

Kayla Caroline Johnson M.D. (née Brady, formerly Deveraux) is a character from the soap opera Days of Our Lives. She made her first on-screen appearance in 1982. Kayla was created by Pat Falken Smith as one of the original members of the Brady family, a fictional family on the serial. She is widely known for her popular pairing with Steve Johnson. This relationship gave the couple the title of a famous super couple. Kayla was described as being the “good” girl of the serial.

During her time on Days of our Lives, Kayla was extremely well received by television critics. Kayla Brady Johnson is one of the six Brady children. She is the daughter of the late Shawn Brady Sr. and Caroline Brady. She is the sister of Roman Brady and Kimberly Brady, the half-sister of Bo Brady, and the sister of adopted brothers Frankie Brady and Max Brady.

She has been married three times, to Jack Deveraux and twice to Steve Johnson. Steve and Kayla have two children, a daughter Stephanie Johnson and a son, Joey Johnson. She has a step-son named Tripp Dalton, Steve’s son with his ex-love, Ava Vitali. Mary Beth Evans returned to Days of Our Lives for a short-stint on June 18, 2010, and then again on recurring status starting in December 2011. Mary Beth was put on contract in 2015.

Ciara Alice Brady is a character from the soap opera Days of Our Lives portrayed by child actress Lauren Boles from 2008-15. Vivian Jovanni from 2015-17, and is currently portrayed by Victoria Konefal.

Ciara is the youngest and only daughter of popular supercouple Bo and Hope Brady and the younger and only sister of Shawn Douglas Brady and the late Zack Brady. She was born onscreen and is a member of three of the most prominent families of Salem: the Bradys, the Hortons and the Kiriakises. She is one of the legacy characters of Days.

She is one half of the popular couple Ben Weston and Ciara Brady also known as Cin.

Child actors, Dakota and Danica Hobbs were the first actors who originated the role of Ciara Brady, when they appeared in the role from 2007 to 2008, the role was then taken over by Lauren Boles from 2008 to 2015. In 2015, Days of Our Lives sent out a casting call using the code name Danielle, describing the character as a 16–17 year old girl who has experienced a lot of pain in her life.

In October, 2015, it was declared that Vivian Jovanni had won the role, which had been previously played by child actress Lauren Boles. Jovanni made her on-screen debut on October 30, 2015. In December 2016, Jovanni left the show, In July 2017, it was revealed that Ciara would be recast and return in December 2017 alongside Brandon Beemer’s Shawn-Douglas Brady and Martha Madison’s Belle Black. In August 2017, actress Victoria Konefal was cast as the new Ciara, making her debut on December 1, 2017.

Lani first arrives in Salem, Illinois as a new police officer. She begins looking at a picture of Abe Carver. She also started a flirtation with police detective Rafe Hernandez. Abe saw the photos of him on Lani’s laptop and soon realized that she was his daughter with Tamara Price. Lani and Rafe attended the Bicentennial where Abe confronted Lani about his suspicions, and Lani confirmed she was his daughter. Abe said he wants to tell Theo before everyone else. Soon after, Theo asked Lani for help when Joey Johnson collapsed.

Lani was very helpful with realizing that Ben Weston was the actual necktie killer because almost all the murders looked staged. Lani and JJ went to mammoth falls to arrest Ben. When Theo found out that Lani was his sister he threw a fit and did not talk to anyone, except her. Theo saw Abe and Lani eating and talking, and Abe wanted Theo to join them, but Theo said no and Lani realized he was upset. Theo confide in Lani that he was being bullied.

Lani kept trying to seduce Rafe even though it was obvious that he was not interested That became official after Hope Brady killed Stefano DiMera and Rafe became close with her. Lani got a new partner Shawn Douglas Brady at the police force and the two became close. Shawn and Lani started flirting and eventually kissed. Lani and Shawn went to a cafe on a date during Shawn’s sister Ciara Brady’s birthday Theo and Claire saw Shawn and Lani kiss. Lani, joined Shawn, JJ, John Black, Rafe, and his father Eduardo Hernandez on infiltrating the compound of Tim Robicheaux (Yo Ling). A gunfight broke out, before they were driven back, and John was captured by Yo Ling’s men.

Shawn and Lani continued their relationship and Lani tried seduce Shawn almost every possible time. Lani and Shawn kissed and almost had sex on the interrogation room table. Lani revealed to Shawn that she had a relationship in Miami that ended in disaster and that Shawn was the only real love she ever had.

Lani and Shawn went to a motel, but ended up busting up a drug deal that was taking place in the room next to theirs. Shawn and Belle reconnected and got back together, and his relationship with Lani ended as a result. Lani was said to be in Miami Florida, but returned to Salem near the end of the year. She agreed to help Theo investigate Valerie Grant, who had gotten close to their father, and on New Years Eve, revealed to J.J. that she was the woman he had slept with while in Miami.